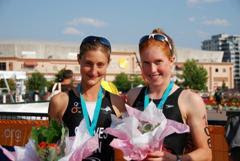 So I figure I am definitely in need of an update now as LOTS has been going on over the last few days.

I raced National Championships in Kelowna on the weekend, winning the race and my 2nd National title. It was wonderful to share this win with my parents, sister, aunt and uncle (as well as quite a few gorgeous standard poodles along the sidelines).

I knew my swim was key in this race as the field was small and there were a handful of strong swimmers. I had a clear start, and within the first 100 metres, hopped on Kathy Tremblay's feet. There was a bit of rough jockeying for position around the first couple of turn buoys (everyone seemed to want Kathy's feet!) By the end of the first lap I was right up there with the leaders and I could see we had a gap on the rest of the field. I was positioned near the back of the 5 other women in the group and had a very sweet draft for the second lap. It was definitely a good swim for me and I was right where I had wanted to be. The six of us worked together on the bike and the pace was steady. Overall, the bike was relatively uneventful and we entered T2 as one pack. I had a great transition and immediately took the lead on the run. Kathy ran up to me and then Paula joined us. I wasn't feeling especially great and as much as I wanted to "hit-it" from the start, my legs just wouldn't let me. I felt better as we went along and even tried a couple small surges to see if Kathy would respond. And she did. Everytime. It wasn't until the final lap that I started to think ahead towards the finish and when I would really commit to a serious surge. With about 300 metres to go I picked it up. We've done some fast 400's on the track and I knew that if I could run fast at the end of a workout on trashed legs, I could probably survive a final push in this race. I opened a small gap on some of the tight turns and carried the speed up the hill on the bridge. I didn't look back until I was nearing the line because I know Kathy is experienced... and has speed!! I didn't have much time to celebrate in the finish chute, but that's ok, because I was just so happy to be able to stop running!!

The full results can be found here. I lost my timing chip during the swim (Ogopogo must have needed a snack), so my actual splits are an estimate based off the other women in my pack.

And, now for the really exciting stuff... Adam and his race partner, Aaron Heidt have just finished day 3 of the TransRockies Run. They had a rocky start on Day 1, but won the stage yesterday and finished 2nd today. In the general classification they are in 4th position with three stages left, so a podium finish is definitely not out of the question. These two have had some a few hiccups along the way (dehydration, deep blisters, smashed-in teeth, stitches,...), but isn't that all part of the experience? 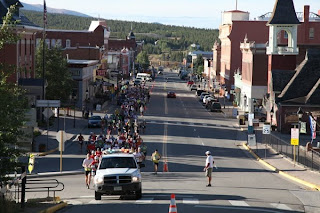 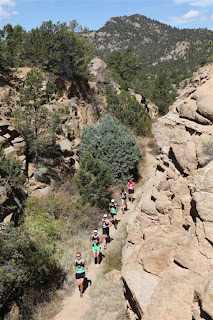 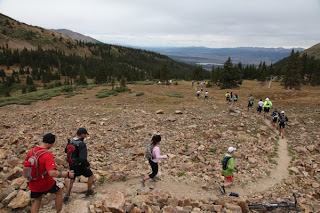 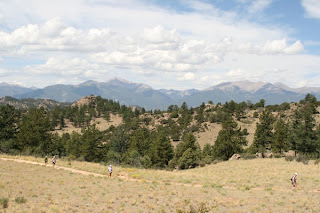 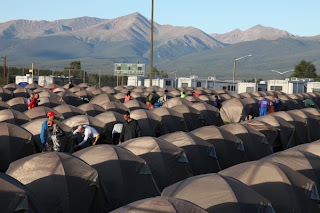 Congrats on a nice win. So close.