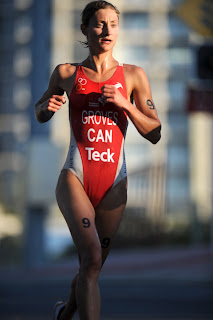 This will be a quick note as I am sitting at an internet cafe at Manly Beach, in Sydney.
I am definitely disappointed with yesterday's race, the Grand Final of the World Championship Series, with a 19th place finish. The swim really set the tone for the day, with the lead group swimming off course through the choppy waters. The pack behind followed and was pushed even more off course with the strong currents. Unfortunately I was stuck in the thick of things and didn't have many options but to stick with those in front of me. By the end of the swim, it was one long string consisting of nearly all of the 45 women and I was sitting in around 25-30th place in this bunch. By the time we were on the bikes, it was clear that there were three distinct packs and I was in the third group. I had about twelve or so other women in my pack and for the most part, we were not organized. I didn't have the strongest cycling legs yesterday but I put out what I could. We lost time to both packs ahead and were over two minutes behind the lead group by the end of the ride. As always, I did my best to salvage what I could of the race and was able to run into the top-20. It wasn't one of my better runs this season, but it's been a long year and I was pleased to finish up with a 12th place in the World Championship Series Rankings.
I always find it special to wear my red swim suit and represent Canada at a World Championship event. Thanks so much to everyone cheering out there! Hearing some familar voices really made a difference and if I wasn't working so hard, I would have given you a smile and/or wave!!
I'm not quite sure what is next for me, as far as training and racing goes. I'm going to take a few days off to decide if I want to jump in a few "fun" events.... or catch up on the "other" areas of my life (moving, quilting, planning a wedding... :)
For now, I am spending couple of days touring Sydney with Simon and Kim. Sightseeing, shopping, eating meat pies, drinking too many coffees is definitely on the to-do list. Photos to come!
Posted by Lauren at 11:28 PM

It was an absolute pleasure to watch you race. The swim looked nasty (and where was that led group going) you looked so strong on the run, impressive and highly motivating. May not have been what you hoped for but Canadian fans were proud of our women athletes. Enjoy some down time! Thank you.

Congratulations on making the best of a difficult race Lauren! You obviously did the best you could under the conditions on the day and I hope you are really proud of the great season you have enjoyed and your ultimate result. I found the race really inspiring to watch (watching on my laptop via a poor internet connection, lying in bed in the middle of the night in Calgary!)

CONGRATULATIONS on a great season! You have so much to celebrate. Enjoy it.

Congratulations Lauren! You are an inspiration