When we talked about having a "simple wedding" we should have realized that this is actually an oxymoron. If you are not going down to city hall, eloping to Vegas, or restricting the guest list to immediate family, then you must be prepared to open up a big fat can of bridal worms.

Seriously, there is a lot to think about. Now I know why most couples take over a year to plan their wedding. You've got the dress, the venues, the flowers, the rings, the guest list, the invitations, the food, the bridal party,..... seriously, that is only scratching the surface. With only 5 weeks to go, I don't have the luxury of obsessing over the details and have had to make quite a few quick, on-the-spot decisions that would take a normal bride more than 10 seconds to make. But, I have really been enjoying the process (much more than I thought I would) and I think even the groom is looking forward to this day. Actually, he's probably looking forward to the end of Lauren as "Bridezilla!" I quickly learned that planning weddings or even talking about the details is not exactly his cup of tea. We still have to go for the very unpleasant task of ring shopping and I have a feeling this will feel like dragging a stick through the mud. Shopping is not his idea of a good time, let along jewelry shopping.... for himself! 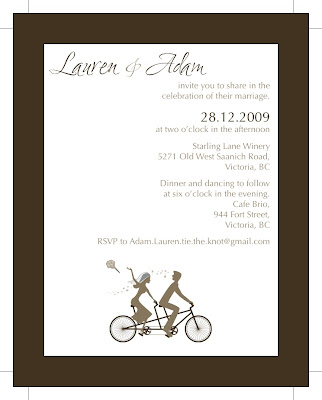 Thanks to Adam's cousin, Karla for designing the invitations!
Training has been rolling along and I can officially say that the fun and motivation is back. The swim volume and intensity is picking up and I'm splashing my way through about 30km per week. The run is building up with some tempo effort mixed in and the fitness is slowly starting to creep back (that sure is a nice feeling). For riding, I've been out on my cross bike this past week, venturing on some unfamiliar territory: TRAILS. And no, I am not talking about the Goose (Phil has forbid me from riding this non-technical, partly-paved terrain.) I used to consider the Goose off-roading (seriously) so what I have been thrown into this week is seriously beyond what I ever thought I could, or would enjoy doing. Day one was rough and I unclipped and wimpered far too many times. Day 2 was definitely smoother but the trails were less technical... and may have involved some time on the Goose. Cross ride # 3, today, was awesome. Flooded trails, epically steep rocky trails (I am not exaggerating, ask Austin!), and minimal wimpering. I am far from wanting to enter cross races but I am at the point where I enjoy the challenge and am getting braver every ride.
Posted by Lauren at 7:22 PM