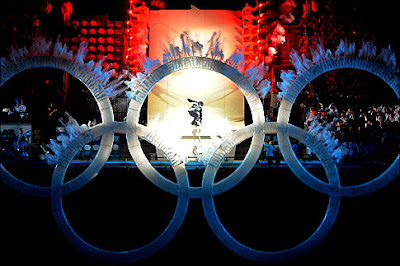 Watching last night's Opening Ceremony made me truly proud to be Canadian. Despite criticism that it "underwhelmed" and was "boring," I found myself glued to the TV, with goosebumps (yes, I get these a lot when bursting with inspiration/excitement). Maybe I was like a proud mother where my child (the show) could do no wrong, but from the range of performers, to the tasteful and respectful memorial to fallen Georgian athlete, I thought Vancouver put on a fantastic ceremony, showcasing how great Canada is. I know VANOC is deeply embarrassed by the unexplained malfunction of the fourth torch, but reading this quote by a Toronto Star Reader puts a positive spin on the situation: "it could also be regarded as simply an unlit flame for a soul taken."

I have to admit that what amazed me most is how they transformed BC Place Stadium. The only time I have spent in that stadium is post-Sun Run and that is what I call underwhelming. Smooshed bananas all over the floor, paper cups everywhere, sweaty bodies packed in there with a nice potent haze of B.O. hovering throughout. Don't get me wrong, I love the atmosphere post-race, but I remember looking around last time I was in there, thinking there is NO way we can hold an Olympic ceremony in here..... But, we sure did pull it off, turning an existing facility into a world class Olympic show. 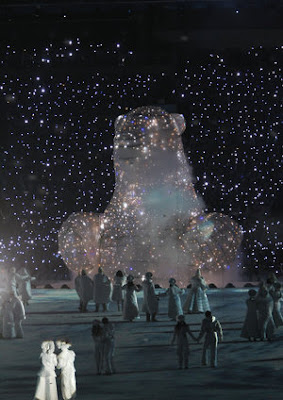 As for me, well..... let's just say I sure am glad the Olympics are starting because I will be spending a whole lot of time in front of the TV and on my bike over the coming weeks. X-rays are not the best for showing early stages of healing as there must a fair bit of callus to show up, and one month is still early for this. I was disappointed that mine didn't show what I thought it would, even though I was CERTAIN I saw some major signs of healing, but clearly my eye is untrained! I guess I was just so proud of my bones ;) There is definitely some healing, but not a whole lot and seeing the current state of the fracture was a good reminder that I still have broken bones and cannot "crank it" just yet (I think I say this to Adam everyday: "I just want to CRANK it today!!") Despite not setting world records for healing like I had planned, I will sweat it out on the bike, hike (with ponytail) and flail my way up and down the pool.

I do have to share the conversation with the x-ray technician though because this seems to have become an amusing situation for me. After the first x-ray, she returns to the room and says, "have you immobilized this?" Me: "Umm, yes, of course... well, for the first couple of weeks..." At this point, I'm thinking, geeze, I'm doing so well that she's simply curious how I have recovered so quickly. After x-ray two: She returns to the room and all she says is, "Well.....good luck." At this point my stomach knotted up..... what does she know, right? Well, I guess she knows a broken bone when she sees one!

Luge is on so time to get on the bike! 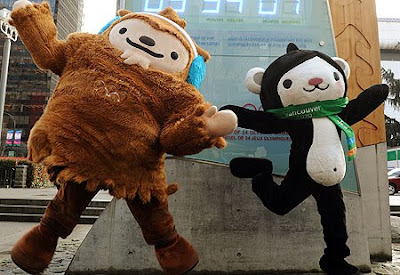 Hi Lauren, As a reader of your blog and neighbor in the U.S I must say I agree completely and I thought your opening ceremonies were top notch! Proud to be your neighbor and I must say you guys always are the envy of all when it comes to your athletic attire and color choice. I love the red/white combo, and would die for some of those gloves! Continued good wishes in your healing. Dawn

I agree with the previous post--the ceremonies were definitely not underwhelming and were incredibly well done. So... well done Canada!

I was struck by a very deep sense of the common heritage we all share (Canada & USA). So if the opening ceremonies and the Olympics are meant to bring countries closer together, than I'd say--mission accomplished!

Wishing you a speedy recovery!