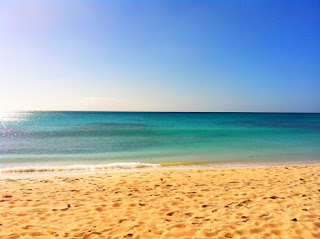 Racing in Barbados wasn't in my original race plan for this year, but Joel and I decided about two weeks ago that it wouldn't be a bad idea. Because of my sub-par result in La Paz last month I hadn't earned enough ITU points to ensure a start at the Mooloolaba World Cup and Sydney World Series event, so if I wasn't able to get a start there then this Olympic campaign would pretty much be over before it even began. Also, racing again would give me an opportunity to show myself where my fitness truly is, as my confidence had wavered a bit since La Paz, and this could be a good boost going into the next training block. Plus, Barbados was only a half day's travel from our base in Florida, so it was a fairly easy decision.

But, putting Olympic plans and race schedules aside, I have been dying to go to the Caribbean for as long as I can remember! When I was young I would study travel brochures for hours and even went through a phase where I wanted to be a travel agent. I figured that if I couldn't travel to these gorgeous places, I might as well help others plan their adventures! I remember being quite interested in St. Lucia and Turks and Caicos, and my fascination was 100% related to the colour of the water. The turquoise ocean was like nothing I had ever seen! So, when Barbados became a possibility, you can imagine my excitement to fulfill this childhood dream.

And, the country didn't disappoint. Right from the get-go, we were treated to the gracious Barbadian hospitality. My teammates, Kerry Lang, Kirsten Sweetland and I were spoiled by our homestay, the lovely Pile family, at the Brighton Plantation, the oldest home in Barbados! It was in the middle of the island, surrounded by lush plantations and historic buildings. It is still very much a working farm and there is a farmer's market on the property every Saturday morning. We were treated to farm-fresh omelettes and cappuccinos on our first morning there as we browsed the stalls full of fruits, veggies, and handicrafts. Their house was built in 1657 and was incredibly well-preserved and well, very grand. I definitely felt like a royal during my stay there and I'm pretty sure my bedroom was close to the size of our entire apartment back home. It was one of the most unusual yet incredible pre-race experiences I've ever had. The family owned 5 very large dogs and while I don't usually get too excited over bigger dogs (standard poodles aside), this pack was full of characters! There were 3 weimaraners and 2 pitt-bull-great dane-bull mastiff crosses. That is A LOT of dog and it wasn't unusual to have all five of them charge towards me to say hello in the morning. 500 + lbs of canine was a bit overwhelming but all part of the experience! I even had the pack join me for my early morning pre-race jog through the plantation. That set the tone for a very fun day.

The race was located at Brighton Beach and when we went there for a swim the day before, I was speechless. IT was even MORE stunning than I had anticipated.... and usually when you build something up for decades it doesn't meet your expectations, but somehow this exceeded mine. The water was brilliant blue, clear, warm and calm. I couldn't wait for the race. 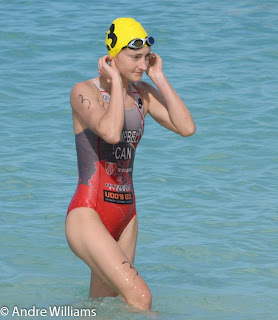 The women started a couple hours after the men, at 9:30am. I was ranked third so was able to select a spot close to the end of the pontoon. I had a clean start and could see I was slightly ahead of most of the field within the first few strokes. I could see Kerry (super swimmer) ahead and the British athlete, Vanessa Raw catching onto her feet. I was able to move over in time to catch on to their feet and hung on for the rest of the swim. I exited the water in third place, right with Kerry and Vanessa and did a small happy dance in my mind as I finally had the swim I knew I was capable of. There wasn't much time to celebrate as I had to hustle to get on the bike. I knew we had a small gap to the rest of the field behind us so once we were on the bike, we were organized right away and pulling away from the others. Kirsten had an incredible start of the bike, steamrolling through the pack behind, riding herself right up to us. We had a very strong and motivated pack, working well together. Before we knew it, we had over a minute gap to the others and by the end of the 20km, the lead was up to 1:40. It was getting HOT at this point and I think we were all beginning to feel the effort from the bike. I really wasn't sure how I was going to run after that effort but I took it out hard, was able to run right up to the front and just kept going. I didn't feel stellar but I'm not sure that's really possible in those conditions. It was just such a relief to be able to push hard again and RACE. I know I said this before, but I really didn't know if I "still had it" after everything I've been through. This wasn't the best race I've ever had by any means, but it was a stepping stone in the right direction. There's still a lot of work to do before the next series of races, but I'm ready for it. Racing here was the right decision on many levels so I am thankful I was open to the last-minute decision to race.

And, it was a GREAT day for our squad with Kirsten finishing in 3rd (a nice comeback for her too!) and Kerry in 4th. I think we made coach Joel proud :)

Unfortunately I didn't get to hang about and tour the island. After chugging all the water I could stomach, I finally got through drug-testing, packed my bike, and flew to the airport. I was sad to miss spending some relaxed time with our homestays and on the beach, but I was keen to get back to Clermont and settled for the remainder of our camp. You can bet though that I was glued to the airplane window as we took-off and already making future plans for a return trip with Adam. After reading through a travel brochure I realized that I did zero things on the "top 25 must see/do list" for Barbados. ZERO. My childhood self would have been very disappointed in me!

We're back at camp now for a few more weeks. The next race, the Clermont ITU sprint is on March 3rd and is literally right down the road from our house. It doesn't get more straight-forward than that! 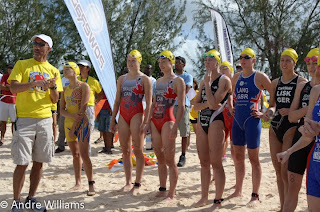 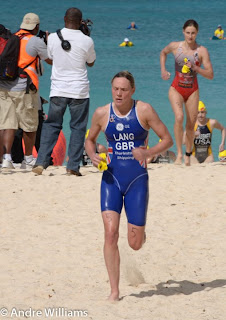 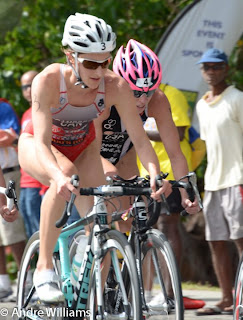 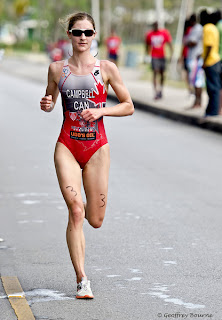 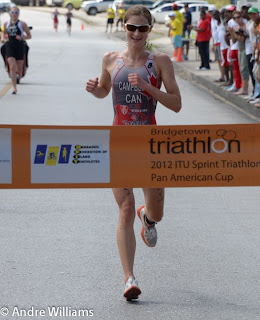 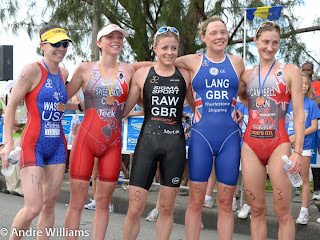 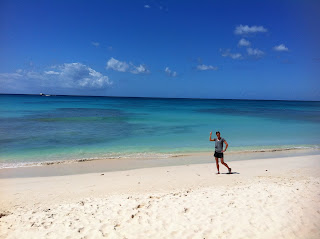 Congratulations Lauren - and best of luck in Clermont~

Well done Lauren. It was a joy watching you compete in Barbados and we hope you'll be back soon.

So happy to see you living your dream again. Good luck in the upcoming races.
Rach.

Congrats on your win Lauren. It was awesome for us local triathletes to see you race...what an inspiration! Keep up the good work, and good luck with your Olympic campaign!

Barbados loves you too Lauren! It was sensational and quite motivating to watch you pro's at work!! Come back soon!! Philip G.

Awesome! You and Kirsten both make a statement at the same race! It's good to "hear" the excitement in your blogging again. Looking forward to watching your 2012!

You were awesome... we didnt meet officially but I was so impressed... well done and good luck

As a fellow "Lauren" and spectator at the event I must say how happy I am that you enjoyed Barbados AND that you rocked that run! Congrats! You must come back to see all that Beautiful Barbados has to offer. I feel so lucky every day...

Hi,
I have a quick question about your blog, do you think you could email me?
David

Thanks for Sharing That... Sucses for You