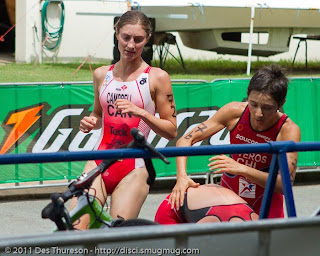 I traveled up to the hot and muggy Sunshine Coast last weekend for my second race of the year. It feels odd to write another race report this early in the season, and like Devonport, the decision to race was made about a week ahead of time. I'm beginning to get used to Darren saying, "How do you feel about racing next weekend? I think you should go." I am also quickly learning that when those words are spoken, it immediately becomes part of the program and isn't really a question at all. That's ok though, I've got plenty of racing excitement banked from my year hiatus so I am keen for it.
The race was a style that I've never done, two back-to-back super super sprint triathlons: 400m swim - 7km bike - 1.8km run - 200m swim - 7km bike - 1.8km run.

As you can probably imagine, this was an incredibly technical race. With two "T1's" and "T2's" (even a "T3": run - swim) there was a lot of planning, and with such a tight, short circuit on the bike and run, focus was paramount. My racing skills aren't feeling totally polished at the moment so I had a few more pre-race butterflies than normal. The field was very small, with only 5 women, but I'd say the depth was pretty solid: Ashleigh Gentle (AUS), Liz Blatchford (GBR), Barbara Rivers (CHI), and Canadian teammate Kirsten. I knew the first swim was important and could really make or break the race. I had a good one, felt comfortable up at the front, alongside speedy swimmers Kirsten and Liz. Barb was right with us too but when we hopped on our bikes we could see we had a small gap over Ashleigh. We were all aware of her run speed so we had to take this chance to get away. The four of us starting working right away, the gap grew, and we established ourselves as a pack of four. By the end of the first run we had strung out slightly, but bunched back together once in the water for the second swim. I have to admit, I have never felt this awful swimming in my life. I'm not even sure if you can call it swimming. It felt like diving in for a "band-only" swim with a heart rate of about 190. I thought for sure I was going to be popped off the back and possibly even drown, but thankfully the others must have felt just as awful as we stayed together as a pack. I got some rhythm back near the end and took the shortest line to shore, moving up to the front of the group. The second bike was uneventful as we saw our gap was larger over Ashleigh so it would simply be a running race between the four of us. The run went around a 380m block which was so short and fast that there was no "settling in" or really doing anything apart from moving the legs as quickly as possible. The last run is a bit of a blur apart from Barb taking over the lead early on and Liz going by me with about a lap to go. It was a close finish with Liz 3 seconds ahead and Barb another 6. After 48 minutes of feeling pretty darn uncomfortable, I was happy to be able to stop moving and catch my breath! 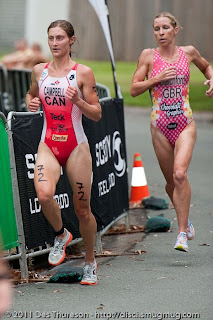 Next up is Australian Sprint Champs in Geelong next weekend. This will be my final prep race before Mooloolaba World Cup and Sydney WCS. As fun as these weekend racing adventures are, I'm looking forward to giving my bike case a rest in the shed for awhile and settling in to a good block of work. Swimming and biking has been my focus for so many months so it's time to put some work into the run. Hooray for that!

Yay! So glad to hear everything is going well (and that you are oh so speedy too!). See you in March!!

Good race Lauren. Great to hear that you are coming back on form.

All the best for the rest of the season.