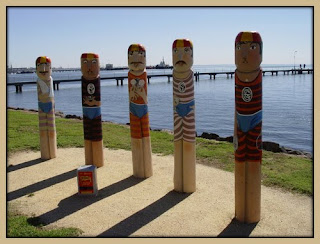 I raced Australian Sprint Champs in Geelong this morning. It usually takes me more than a few hours after a race to write a report, but without having to pack up and rush to the airport tonight, I've found a few quiet moments to put my feet up and share my thoughts.

I flew into Melbourne yesterday afternoon with one of my training partners, Czech athlete, Vendula (Vinnie) Frintova. The two of us hired a car; I was the driver and Vinnie the navigator, armed with a very small scale map of the area and a crappy GPS. The car was manual (not exactly my specialty) and visibility was next to nothing with the bike boxes packed up in the back. Oh dear... I was driving even more like a grandma than usual, chugging along the motorways in and around Melbourne. Thankfully we arrived unscathed and without any major dramas. However, upon check-in we realized our hotel had no power. We also realized there was a bit of chaos surrounding the Saturday races, with the postponement to Sunday due to stormy weather and unsafe water. This didn't affect us apart from having to start a few hours earlier, which I would prefer any day. We braved the windy conditions and hopped down to the course for a ride and picked up some pasta take-away for dinner. Our hotel still had no power when we returned and it was getting dark at this point, so it made for an eventful night. I was rooming with Kirsten so those that know the two of us can imagine the giggling going on as we chatted in our room with only one flashlight between the two of us. If it weren't for the plush beds, I'd say it was pretty similar to summer camp. There was no giggling though when the lights and bathroom fan burst on at 1am once the power was restored. That was quite alarming!

I was really relaxed going in to this race. I think having done a couple other events has eased my nerves a bit and helped to get my mind back in race mode. Much to everyone's surprise, the swim was declared non-wetsuit just before the start (this may have been a first for Geelong). I decided to warm up in my wetsuit as I know how the water can be chilly when things are borderline, but I was pleasantly surprised. The water was actually quite a bit warmer than the air so staying warm wasn't a major concern. It was a deep water start and I had a smooth, clean start. There was no fighting for position and I found myself right on the feet of a pack of four. The pace was solid but nothing out of control. I struggled however to find a rhythm like I have in training and at the previous race. A small gap opened at the final turn to shore and I could see it, but couldn't seem to respond like I know I could. By the time we hit the exit ramp, the gap was about five seconds. I got to my bike as the other girls (Kirsten, Emma Moffatt, Emma Jackson, Liz Blatchford) were hopping on their bikes. I had a good transition but couldn't close the gap and watched them pull away up the road. I was really disappointed but thought I might have a chance to catch them on the bike with the help of the girls coming from behind. My group ended up having about five or six women (or maybe more, it was hard to tell). I was committed to working hard, but unfortunately there were only two others who could or would help. We rode well considering we were chasing four strong, organized girls, losing only about 20-30 seconds over 20km. I had a good T2 and was first on to the run from my pack. My running legs were slightly better than Devonport but by no means did I feel speedy. I ran solid, had a few moments where I felt like my old self again (it's been awhile...), and finished in 6th place.

It's amazing how one small slip-up can really set the tone for the day. I wasn't upset with my effort on the bike, or most of my swim, or even my run. But, those few moments in the swim where I made some errors ended up significantly impacting the outcome. I can't lie, I was really disappointed in myself. I was disappointed because I don't feel as though I swam to my potential. But, I'm trying not to beat myself up. I came here to learn and determine what still needs work, so it's all part of the process. As much as I'm itching to be out there smashing it and winning, I've got to remember it's still early season, not to mention coming off a year of no swimming or running. I just love racing fast but have to keep things in perspective and give myself credit for the small improvements along the way.

I'm really looking forward to this next block of training. What I love about races, good or bad outcome, is the motivation and "fire" I return home with. Darren and I have compiled a checklist over these three races of the things that still need work, so we're going to continue to plug away and check them off. It's five weeks until Mooloolaba World Cup and seven weeks until Sydney WCS, so it's time to get down to business.

Congratulations to Emma Moffatt for an impressive win, Kirsten for her solid 2nd place and Emma Jackson for 3rd. And thank you to USM Events, Triathlon Australia, and all involved with the race. It was yet again another fabulous Aussie triathlon, impeccably organized, even with the last-minute changes. And thank you, Geelong for being so lovely. I have now fallen in love with yet another beautiful coastal city. The photo above shows a few of the many wooden characters along the waterfront. As someone who loves all things artsy and crafty, you can imagine my excitement to check them all out. I need to find the story behind them, so stay tuned for an update on that!
Posted by Lauren at 10:36 PM