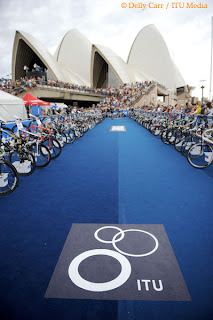 It's pretty late at night but I'm riding the post-race wave of insomnia so thought it might be a good chance to share my experiences from today's World Championship Series race in Sydney.

I had the opportunity to dust off my ITU race skills at Mooloolaba World Cup a couple weeks back, finishing in 9th, after a 20-month hiatus from racing. I'm pretty sure I had the biggest smile out of the entire field that day as I was SO happy to simply be back on that start line after everything that happened last year. There really were many dark days when I doubted I would ever be healthy enough to train on a daily basis, let alone return to a world-class level, so you can imagine my joy when I finally crossed that finish line. I made mistakes in that race, had my cap AND goggles ripped off in the swim, but came away with a strong sense of accomplishment and belonging. I didn't know how I would fare in a WCS field though, but I finally felt I was ready enough to give it a go.

The field today was stacked with the top 66 athletes in the sport. To be honest, it was the most competitive race I've ever done, Olympics included. My ranking was 60th, probably my highest ever, but I guess that's what you get for taking a year off! I guess one positive is that I didn't have to stress over where I would pick for a start on the pontoon as there were only a few open spaces by the time I was called down!

My swim start wasn't terribly rough, which is a very pleasant experience and I found myself holding a nice rhythm right out to the first turn buoy. With a field this big it did get a little messy as we made the turn but I didn't experience much of the dunking, grabbing or pulling that I had in Mooloolaba and I felt like those around me were also focused on moving forwards rather than fighting for position. I had no idea where I was in terms of position because all I could see was a sea of women around me. Once out of the water I knew I wasn't too far down from the leaders but probably mid-field. I got on my bike and chased hard as I know how critical the first lap can be as the packs establish themselves. I knew I was at the tail-end of the lead group and after chasing with a few other women for the first lap, we were able to tack on. It was a pretty large pack at that point and the pace seemed to be all over the place; very slow on the technical corners, many random surges, followed by sudden slowing of pace. I was a little nervous at times, especially after the multiple crashes in Mooloolaba that I managed to narrowly avoid. However, on the 2nd or 3rd lap I was in the middle of the pack, quite close to the curb, when I saw someone go down a few bikes ahead. The bikes then started piling up and I had nowhere to go as I was blocked on both sides. I knew I was going to go down, but it all happened in very slow motion. I don't remember much of it, but I think I did bike over someone, ending up on the road, lying on my side. I got up as quick as I could and hopped right back on my bike. My ankle was aching as I tried to pedal but I didn't put too much thought into it, hoping it would warm-up as I got going. I obviously lost the lead pack after this pile-up so focused on chasing. A pack from behind soon caught me and we worked until we caught back up to the front pack. I breathed a huge sigh of relief when I made it there again! I never knew making and staying in the front pack could be so challenging!! I wasn't feeling too wonderful at this point though and was really looking forward to getting off the bike. I had a great T2, exiting within a few steps of the lead women. Unfortunately my legs were not turning over too quickly and I couldn't go with them. I wasn't feeling terribly fantastic out there but ran as hard as I could, finishing in 10th.

Initially I was disappointed with my run as I didn't feel quite like myself out there, but maybe that's to be expected after all the drama on the bike. When I look at the big picture, where I've come from over the past 6 months and the sacrifices I've made to get here, I'm really quite pleased. To start the season ranked 10th amongst the world's best is more than I could have ever hoped for.

There's no question the excitement of the day though was Paula's WIN. Even from back in 10th place I could see the race unfolding at the front and was quietly screaming for her inside my head. I can't think of a better way to start the season than on top!

I found this photo from an album on Facebook. I'm not entirely sure how this picture was taken (helicopter?), but it shows the carnage on the bike. I think I'm second from the bottom, lying on the road, still clipped in! It sure was messy! 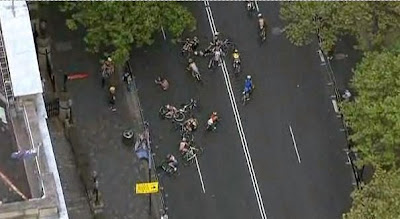 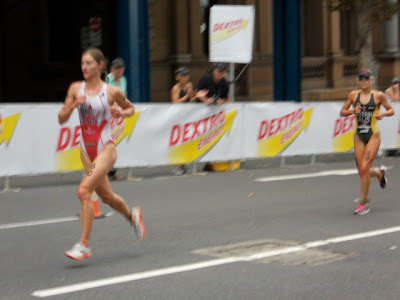 Thanks to super-therapist Sam for taking such good care of my ankle after the race. 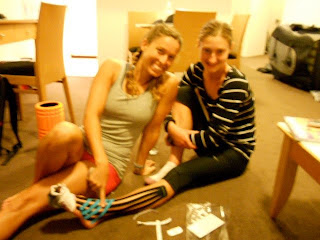 Now the best news is that I will be going HOME to Victoria the day after tomorrow. Yep, the five and a half month-long camp has finally come to an end. Am I excited? Just a little!!!!

I've got an entire day to spend exploring Sydney first though so as long as I can walk/hobble, it should be a great day.
Posted by Lauren at 6:13 AM

Awesome results these past two races, and way to overcome the unexpected!

I can't imagine it is all that fun to know you're going down and just hope for the best. Glad it turned out ok!

Lauren, you are a total star! Thank-you for the gripping description of the race.

Fantastic! We are totally behind you Lauren.
- Your friends at Ryders