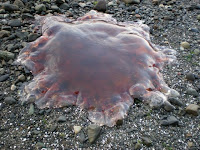 I came across this jellyfish while walking our beach during low-tide this morning. Actually, there were at least eight of them scattered across the rocks and beginning to dry up. They were impressively large, at least two feet across and very thick and gummy-looking. I usually classify jellyfish in the same category as snakes (neat to look at from afar....very far away...but I am scared to death when our paths cross). I didn't exactly feel threatened by these today and was more curious as to what they were. Google helped me solve this mystery. They are Lion's Mane jellyfish, the largest in the world. Their sting is quite potent and has been known to be fatal. They move quite slowly and stay near the surface, relying on the currents to push them. Apparently it is common for them to be washed ashore during late summer as they seek out shallow, sheltered bays during the end of their one-year lifespan. I thought these were quite large, but apparently their bell-top can reach up to 8 feet across and their trains up to 30 meters! I am pretty sure if I had seen one this large on the beach I would have called in the paranormal experts.

Today was another great day on Mayne and we were treated to perfect September sunshine. We spent the morning at the farmer's market and the local craft shops (my favourite pastime). The afternoon began with lunch on the patio of the Mayne Inn and finished with a series of three long hikes on various trails around the island. I had great intentions to return to Mount Parke for a run but I have a cold right now that has left me feeling quite yucky. Maybe I will try tomorrow before I catch the ferry back to Vic.
I also wanted to share something I found quite amusing, but still awesome. The 100 Mile Diet is becoming somewhat of a trend, but for good reason. There was a 100 Mile Harvest Dinner in Fredericton this weekend and Mayne was hosting their own local dinner this week. However, on Mayne it's not called the 100 Mile Dinner....it's the 10 KM Dinner. This island is great!
Posted by Lauren at 8:52 PM