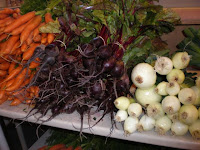 This morning started with a visit to the Boyce Farmer's Market. We are fortunate to live across the street from this year-round Saturday morning market, so apart from having to crawl out of bed, the weekend pastry and coffee make it worth the effort. Adam and I love to visit the market twice before it closes at 1pm. The first stop is for fruits, veggies, freshly roasted coffee, bread and any other treats that catch our eye. The early bird definitely gets the worm so if I want the fresh basil and wild boar sausages, I have got to be there early! The second stop is for lunch, which tends to happen post-run. This market is amazing for a small city and I am still amazed that it is year-round. Local, and often organic, fruits and veggies are in abundance as well as local crafters, fresh flowers, and today pumpkins even made a presence (If it wasn't mid-September, I might have bought one to carve). I'd have to say that this market might honestly be better than the Santa Monica farmer's market (sorry, Jason...). It doesn't quite have the same caliber of celebrity sightings, but the fact that you can get "cheesecake on a stick" makes it a clear winner in my books.
Today, though, was a one-stop market shop as UNB was host to a cross country race mid-day. It was very hard to walk by all the smells of the prepared foods (which, for some reason I still cannot figure out, is entirely chicken or beef souvlaki. Literally, every stall is selling souvlaki. I know it's really good, and the long lineups speak to this, but it still strikes me as somewhat odd for Fredericton).
Anyway, after filling my belly with goodness I jogged over to Odell Park to meet the girls. I've been training with the team and have really enjoyed helping out the girls with their workouts. This was the first "real" university race so the nerves were high. They all did great though and ran tough out there. It's often hard for me to watch from the sidelines without wanting to jump in, but today I was more than content to simply cheer. I honestly felt a lot of pride watching them run today. 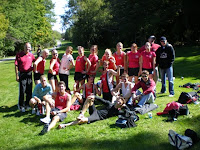 Next up was the men's race with Adam. The course was very spectator friendly, so I had lots of opportunity to cheer and attempt to take photos. Adam had a really strong run and finished as the top UNB guy in 3rd. 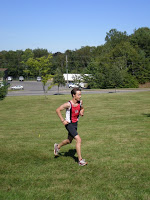 We had a quick turnaround after the race to meet up at Tim, the coach's house for a potluck. I was nervous trying to decide what to bring tonight! Yes, silly things make me nervous but I had good reason tonight. I gave a nutrition talk to the team earlier this week so the pressure was on to prepare something that is healthy and tasty. I had about an hour to cook something up between the race and the potluck. I decided on pizza, with stone ground whole wheat crust and lots of tasty market purchases for the topping: spinach, tomatoes, olives, basil, shitake mushrooms, goat cheese, parmesan and olive oil. I'm my own worst critic when it comes to my cooking, but I was pleased with how it turned out. The recipe was found on the Epicurious website, which has yet to fail me. I think it was the secret ingredient of molasses that gave it a subtle sweetness. 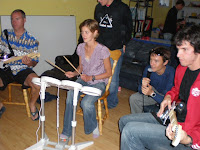 The dinner was a blast, filled with good food and great company. As is always the case at potlucks, there were way too many desserts. But that is never really an issue with hungry runners. We finished off the night with some Guitar Hero and basement floor hockey. The hockey did get a little ridiculous rather quickly with the toddler-sized hockey sticks and some random scuba fins.
We all look way too serious in this photo. I guess we are not quite good enough to just rock-it-out like Bon Jovi. 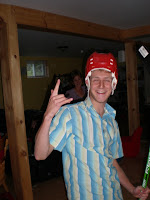 I am now sitting at Tim Hortons. Honestly, I NEVER go when I'm at home in BC. But tonight our wireless signal at home wasn't strong enough to upload any photos, so here I am, enjoying the city-wide free wireless......oh, and of course my Tim Bits :)