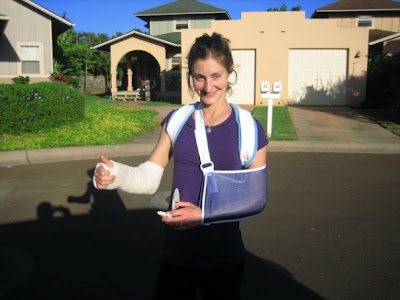 January 14 was my last swim workout and the funny thing is that I remember exactly what I did that session. Now if you were to ask me any other year the specifics of a swim I had done 8 months earlier, I would have no clue. Have I missed swimming much? Yeah, I'd say so.

The x-rays I had done last week showed some good healing (FINALLY!), but the fracture line was still visible so things are not quite 100% solid. I did, however, get the "ok" to hop back in the pool for a SLOW introduction to swimming. Slow was definitely emphasized, as was the importance of avoiding paddles for quite some time (just in case I decided to put on the big red ones and smash it out from day 1. Dr. Keeler, would that be a bad idea? ;)

I was nervous for my first swim. Very nervous, but the nerves were only partly because of the metal holding my collarbone together. I have been coaching/observing the squad swim for the past month. I have been a "student" of the sport, learning the fundamentals of a proper stroke. I was nervous because I knew the "old" me was not an exact master of these basics and I worried that when I got in the water for the first time, my stroke would resemble a combination of my old bad habits and someone flailing, desperately trying to stay afloat. I pictured looking over to the deck after the first length, seeing the pool door closing as Darren left the building. Would my swimming be beyond hope?

Thankfully things were not quite so dramatic. I was not given permission to simply "swim," as the technical lesson began immediately. It was a bizarre feeling to use my arms again. It has been so long and one arm has been so utterly useless and immobilized for so many months that losing "feel" for the water doesn't even come close to what I felt. At first, I honestly felt as though I had started swimming for the first time in my life.

After two days of my intro to swimming, I am starting to feel some soreness in the right muscles. It's a little sad to think that only a handful of lengths can put my body in this state, but I am embracing this feeling more than I ever could have imagined.

And here's a sight I haven't seen in a very long time.... 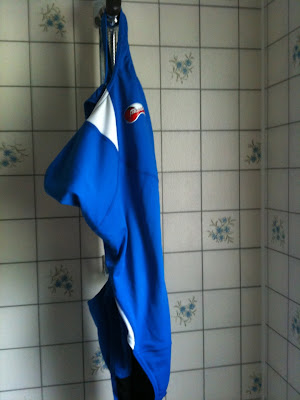 A WET BATHING SUIT!
Posted by Lauren at 1:29 AM

Welcome back..persistence is paying off and you will be a fish again soon!