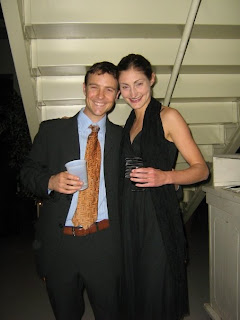 Sadly, I had to say goodbye this afternoon to Adam and everything else great in Fredericton.
I had a wonderful two weeks and would have blogged more if the internet wasn't so SLOW (by the end, I gave up on the city-wide free wireless and resorted to emailing from the miniscule keyboard on my Blackberry. This proved to be much faster.).
My two weeks in NB absolutely flew by. Adam was busy with school in the mornings and evenings, so I kept myself busy with my own Freddy adventures: craft fairs, swimming with the varsity team, cooking, baking, reading and even stocking up on fabrics and patterns at Fabricville (Fabricland's east coast sister store, but much, much better selection...I cannot wait to get sewing again!)
I turned Adam into a triathlete again as he often joined me on a biking or running adventures during his "study breaks." Our daytime runs were on the trails and the dark evening runs were our urban adventures where we would run the streets, admiring the incredible old homes in the historic district. Adam even joined me a few times in the pool for some swims. He gets me laughing so hard at times, I really should wear a noseplug. We are often swimming along nice and cruisey during warm-up when I look over and realize he has moved over to the next lane and is racing me. He knows the only way he can win right now is if he makes me laugh and this is not hard to do when I see him next to me gunning it. On more than one occasion in every swim session, I am nearly drowning from laughter as he speeds by me, looking over at me the entire time. Upon winning the warm-up "race", he always does his trademark victorious pump of the fists in the air, Phelps-style. At this point, I am usually somewhere halfway down the pool, on my back, grabbing my stomach and trying to breath. Oh, I will miss my swim buddy :-)
Last night was the Law Ball. I haven't been to a semi-formal since...... oh, PROM! And, this turned out to be surprisingly similar to Prom in many ways. Law students work hard, but I truly think they party even harder. The pre-party (drinking), took place in the "woods" (just like prom?) and the actual Ball didn't get going until 11pm. It took Adam and I a couple of cups of coffee at 10pm to get out of our pj's and out the door. It was a blast though and I honestly don't know if I have ever danced that much. I realized two things: I can walk much better in heels than I had thought (maybe my foot-strengthening work is paying off!), and, more importantly, I still remember every lyric and choreographed dance move to Baby Got Back (yes, I am a massive nerd!) The prom night reminiscing continued when I took a trip to the bathroom mid-party; there was vomit all over the floor, some girls were crying, and the cliques were gossiping! It truly was just like the good ol' days! 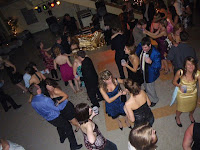 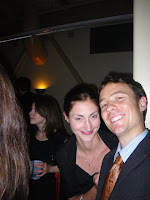 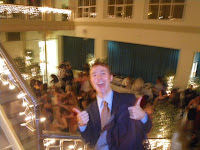 Too tired at this point to hold the camera steady!
I'm now spending quite a few hours in the lounge at the Toronto airport waiting for my Vic flight. As sad as it is to leave Freddy, I'm looking forward to getting back to BC. I will spend most of tomorrow catching up on my quilting and getting organized for the week ahead. Rinny arrives in Vancouver on Monday and we are off to Whistler for a few days. YAY! Let's hope for snow because I'm packing my sweet 1980's ski gear.
Posted by Lauren at 2:19 PM