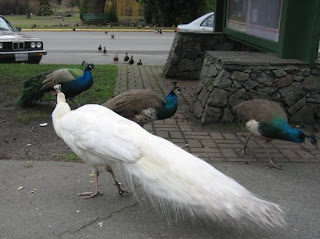 As I was out for my run last night I created a mental list of the things I commonly use to motivate me for a session. For the most part I don't need much more motivation than wanting to be one of the best in the world, but when the fatigue builds up, it's nasty outside, or I just want to stay cozy in my pj's, I need to create this sort of 'list' to get my butt out the door.
Yesterday was one of those days. We swam 5k in the morning, but it was one of those sessions that felt more like 8k as it was shorter-intervals, followed by quite a lot of swimming with "the parachute." In other words, REALLY slow swimming, no matter how hard you try. Next up was a ride to the Observatory with 6 hill reps. It was really a yucky day outside, about 1 or 2 degrees and incredibly windy. But it was DRY so that meant we were riding outdoors. I have to admit I was secretly hoping for at least one raindrop so I would have the excuse to stay warm and dry inside, watching a little more What Not to Wear while on the trainer. In the end, it turned out to be a great ride, despite the few flakes of snow. I did stay plenty warm though as I wore every piece of wind and waterproof clothing I own, and also the fact that hanging on to the guys' wheels is like a never-ending interval. By the time I got home it was late afternoon and had trouble wrapping my mind around heading out for an hour run. Again, motivation is not normally a problem for me, but I sat here for far too long planning my route, what I would wear, and when I would go. It was also raining at this point and the wind had picked up. I think I wasted more time thinking about the run than time spent running. It was one of those sessions where I had to remind myself that this is my JOB, so enjoyment and fun were bumped down on the priority list.
Here's what helped get me out the door last night:
-preparing my dinner ahead of time. It was nothing more than left-overs but I put it on the plate and I knew I couldn't eat it until I was done for the day. I was getting hungry so that helped speed things along.
-putting on my favourite running track pants. I had to wear tights underneath, but I love these pants for easy runs.
-making it a "destination" run. I am apartment-hunting and I was going to view a place today and wanted to have a look at the area beforehand.
-running by the peacocks at Beacon Hill. Yep, I'm a total nerd, but this is a must for me on most runs. My feathered friends aren't out after dark so again, I had to get moving!
It turned out to be a really great run, my legs came around, and I simply enjoyed every moment of the trot along the waterfront. The highlight was actually the hill reps as the wind was from behind, pushing me UP the hill! My face was numb by the end but dinner was delicious and I have never appreciated my pj's quite so much.
Posted by Lauren at 5:13 PM

way to go Lauren! you're an inspiration