My training partners are INVINCIBLE!

Or, maybe they're just guys that are crazy strong and talented. That might be it, but it seems much cooler to think they're invincible.
I know it's good to train with those faster, fitter and stronger than you, but I think Kyle and Simon take it to a whole new level. They never seem to be tired and are always ready to GO (note to Sarah: remember how the saying, "relax, it's January" was the slogan for Maui, well this theme did NOT continue into February and I think it will never be spoken of for the remainder of '09...).
But, for me, keeping things in perspective, everything is going well. This has been a big week, possibly bigger in terms of volume than we were doing in Maui and I am feeling stronger as the weeks tick by.
Back to my training partners though... we had a 3.5 hour hilly base ride on the schedule today. Last week I rode well for this ride so was looking forward to another long morning of (trying) to hang with the guys. I met with with Simon, Kyle, Jasper, and Steve-0 for the first half, starting along the waterfront. My legs were feeling strong today and I thought this could be a fun one. However, about an hour in, I started to feel a little "off"...and hungry. We stopped for a bathroom break and I quickly shoveled all of my fig bars in my mouth. My first thought was "uh-oh, I just at the bulk of my snacks within the first hour," but hoped there was a chance the sugary carbs would sustain me for at least long enough to get through most of the ride. Once riding again, I still didn't feel quite right and was definitely still hungry. I peeled off to a gas station and bought a king size Snickers bar. I wasn't confident the regular size would do the trick, so I took the safe route with this chocolately monstrosity (I know, really kind of gross and not something I would normally eat, but I had to try something). It helped for a bit...until Simon and Kyle turned it on when we hit the hills...and that was it for me today. I finished off the last half, riding the hills, with Jazz and Steve. Despite not feeling too wonderful, I really enjoyed their company, finished feeling as strong as I did at the start (that's something positive, right?!), and it was a beautiful, sunny day.
I have just returned from a run and cannot believe it's already 5pm!! Seriously, where has the day gone?! Wendy is away this weekend so the Hotel is quiet...and lonely! I don't have the creativity to prepare much of a meal tonight so I am off to re-fuel with some Ethiopian.
I was sent this video today, a finishing clip of the Fast Triathlon in Brazil last month (I am the PALE one....well, apart from Kerry ;-)

And, I hoped Adam might surprise me with some thing like this for Valentine's Day, but no luck... Maybe next year... 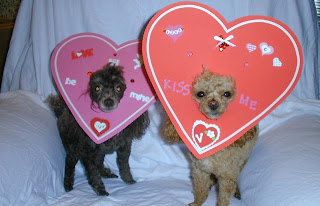