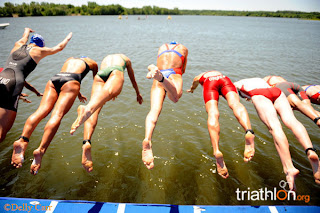 After three sleepless nights, I still feel as though I’m on a bit of a high from all the racing. We’re on the plane now and everyone around seems to be sleeping….except me!

The sleeplessness began on Friday, the night before the race. I don’t normally get like this before races, but I was bursting with excitement. I remember saying to Adam on that afternoon that I wanted to race NOW. I had stuck my numbers and gels on my bike that morning, packed the transition bag, and I’m pretty sure I would have put on my tattoo decals if I wouldn’t have looked like a total nerd. I tried my best to bottle my energy for the next day, but I found myself lying in bed wide awake for most of the night.

Thankfully the eagerness was still there by the morning and I was able to relax before the start, staying cool in my ice vest. I knew I had to have a stellar swim here, but a swim I was more than capable of. Right from the start, I put my head down and caught on to some quick feet. Thankfully this swim wasn’t quite as rough as Washington, but we were moving quick and I knew I was in the thick of this pack so would have to hold my position to ensure I made the group. I came out of the water about 25 seconds down from the lead pack of 8, but in a strong chase group with Snowsill, Ryf, Lavalle, and Ellis, to name a few. YES, finally a great swim for me. Once on the bike, the pace was ON and this course was technical! I was with some incredibly strong and motivated company in this pack, a nice change from previous races. We held the gap at about 35 seconds for most of the ride but were unable to reel them in before the run. I knew I still had a shot for a top-10 finish but would have to be patient as it was HOT out there. After the first loop, I was running about 8 seconds back from Snowsill and I could see we were closing the gap to some of those front pack girls. Most of the run, to be honest, is a bit of a blur. But, I do remember running by our pretty excited support staff (I was trying to stay calm throughout as it’s not over until I actually cross the finish line!). I also remember the feeling when I moved into 3rd place. I think I screamed, “OMG” in my mind more than a few times and definitely found another gear to ensure I was going to keep that position!  I wasn’t thinking about the money at this point, more the fact that I finally got on the podium at a World Cup! My string of 4th places are history!

My parents were there to share this moment with me. I don’t think they came to Iowa expecting this kind of thrill as they’ve witnessed quite a mixed bag of performances over the years. Not having Adam there was tough though! One of the first things I did was grab my cell but there was already a message waiting from him. I wish I had saved it to listen again as it was priceless. Not entirely understandable because of the screaming, but I got the idea :)

And then came the men’s race…. I was tied up in doping control for a couple of hours but was able to sneak back into the finish area during the last lap of the run. Oh WOW, that final stretch was incredible. Those finish photos really capture the moment. And Brent was just behind them… amazing. 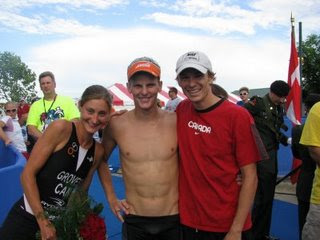 It wasn’t until the awards ceremony that my result felt real to me. I was standing on the podium with two of the Olympic medalists. Actually, four of them, when we jumped up there with the men. It was surreal……but, I was snapped back to reality when Frodeno sprayed champagne directly into my open eye. Oh man, that stung!! 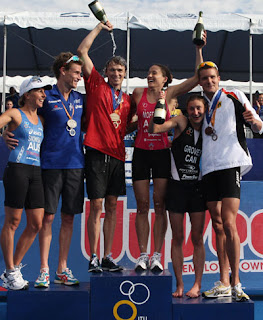 By the time we were back at the hotel, it was after 8pm and after a quick massage, chiro adjustment and ice bath, it was off to sleep… or at least try to….

The Team World Champs was the following morning and Canada had entered 3 teams. I wasn’t sure how I was going to feel for this event, but when I saw the nervous excitement of our group, I couldn’t help but get fired up. I was on a team with Brent, Kathy and Simon and I was leading us off. Oh man, this hurt, possibly more than the race the day before. I hung in the front on the swim, barely hung onto the top group on the crazy technical bike, and put myself in a world of hurt on the run. Our team finished 3rd overall, with the other Canadian team not far behind in 5th.What a great day of racing for everyone. 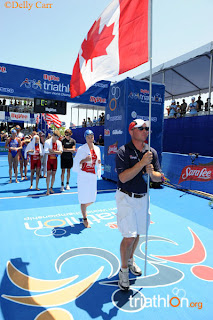 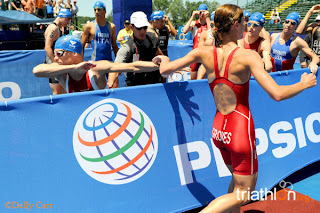 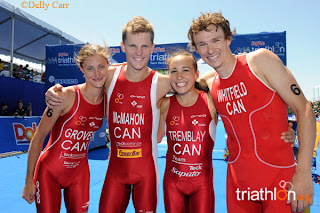 We are now headed home for 6 days before we pack up for three weeks in Europe. We will be based in Kitzbuhel, Austria for most of the month, preparing for the next World Championship Series event (which is in less than 2 weeks…yikes!) and then the Hamburg WCS race. As much as I am looking forward to stocking up on new Birkenstocks and tasty European pastries, it will be a long time to be away from home.

Speaking of home, I need to start researching local poodle breeders! I can't decide between standard, miniature, or teacup.....

congrats on the awesome weekend, it was really exciting to watch.

CONGRATULATIONS LAUREN!!!
YOU ARE AN INSPIRATION