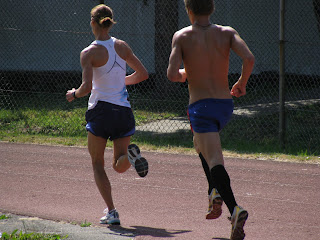 I've mentioned before that I'm not someone who loves training. I enjoy it, but only because it gets me ready to RACE. I've had a few unexpected opportunities to "race" this week in training and nothing gets me going like a bit of friendly competition.
Tuesday: After a busy weekend in Vancouver, I was ready to go today! Swim was a big one. Basically warm-up for 1km, main set of 30 x 100 @ 1:30 best average, 1km cool-down. I love these kind of sessions. No talking, just hard swimming. I had Paula beside me and we were a pretty good match, really pushing it on the final few 100's. In the afternoon I met up with the NTC development group for a set of 6 x Observatory climbs. Coach Phil wanted to me to ride them all "hard" but on the 2nd rep I was able to join in with group for a TT effort. Of course there is a big difference between "hard" and "TT" (ie. RACE), so with the clock on me and having people up the road to chase (and guys behind chasing me), I was able to find that little bit extra. Adam joined me for my run off the bike and as always, our strides in the gravel field turned into mini races. I get a couple of seconds head start and then run for my life!!
Wednesday: It was a big group swim at the lake this morning. This is typically our aerobic strength swim, but when you get a big group together doing longer intervals, "steady" becomes "fast" and for me to stick with the guys, it becomes especially FAST. I met up in the afternoon with the NTC group for 5 x 1km on the track. The guys were building into it so I had a nice pack to block the wind on the first 1km. I managed to do a nice descend through the set and found myself in a little sprint over the final 100m of the last interval. I think I even did a little lean at the line and we may have to check with Phil for the photo-finish results.
Thursday: An easy, cruisey 4km swim and then a long ride in the afternoon. I met Adam at work and we rode the last half together through the Highlands. There was nothing too speedy about this ride....until we got to the final stretch in Cook Street. We raced home, taking different side streets. Somehow I found some power in my legs which I didn't think existed on that day, but it wasn't enough to beat this professional bike-commuter. He did his victory fist pumps as he cruised down the driveway. Grrrr! (Noa, I think I would have won handedly before he was Retuled!)
Friday: Back at the lakes for about 5km of all kinds of efforts. This was just a hard swim! I went for an easy base run at Elk and had the company of about two hundred elementary school kids doing a walk-a-thon. Most of the kids were doing the warm-up loop, but as I continued on I saw a couple boys running towards me. One kid was really moving so I decided to turn back and join him. He was in grade 5 and was doing the 10km for the walk-a-thon. He had never run that far but he wanted to win it (I love it, a charity, "fun" walk becomes a RACE!). There was another boy just ahead who was doing more shoulder-checks than I had ever seen, clearly running scared! He knew his friend was coming! When we got within striking distance, this boy turned it on! He dropped me and FLEW by his buddy, passing him with some serious authority! AND, he was running with a litre of Gatorade in his hand! It was awesome!!
Saturday: This morning was our final big bike-run session before Washington next weekend. Coach Phil was riding the "flames" scooter and motorpaced Kyle and I for a set of 3 x 15 minutes. We ran off the bike around the 2km loop at Beacon Hill. Today I was only racing the clock, but it was enough to motivate me to run my fastest loops. Sneaky Phil made this run look easy on paper but it was basically 3 x 9 minutes flat-out. I'm done for the day and probably done with "racing" until next Sunday!
Posted by Lauren at 12:07 PM