Paula laughs at me every time I said the word "torrential," probably because I overuse it...and sometimes grossly exaggerate (if it's there's a trickle in the sky, I might say, "oh wow, it's torrential"). But today, she was the first to use this term and Paula would NEVER be one to stretch the truth (in other words, she's anything but a drama queen).
The weather in the Alps changes so quickly. We saw this last weekend for the men's race. It was about 12 degrees and torrentially raining. Two days later it was 33 degrees and we were all winging about how hot and sticky it was. We lucked out most of the week with the hot and sunny weather, but yesterday on our ride some dark clouds rolled in extremely quickly. We were quite far from home at this point, riding through the most beautiful valley, alongside a crystal clear lake. At this point I was still loving life and had a big smile on my face, but when the darkness set in Philippe was quick to jinx the situation ("It's going to rain!"). And that it did. Torrentially. I think our tempo effort was extended a little as we raced the lightening home. It eased up a little in the evening but sometime in the night it started again. Honestly, if there was a more dramatic word than torrential I would be using it. It POURED. All night and ALL day. I turned on my favourite channel this morning, the live Kitzbuhel mountain camera and all I could see on the TV was a white screen. SNOW......just up the hill!
We all had a lazy morning, curled up in the apartments watching the rain, waiting for it to ease, but it never did. We put on all of our warm run gear and headed out on the "endless" trail for the run workout. It turned out to be a great run for everyone but by the end we were all a little chilled (especially coach Phil on the mountain bike! Brrrr).
Thankfully the weather will change as quickly as it did yesterday and we should be back to sun and warmth by tomorrow afternoon. I had to admit though it was a fun day. I can't remember the last time I've seen snow anywhere in July! 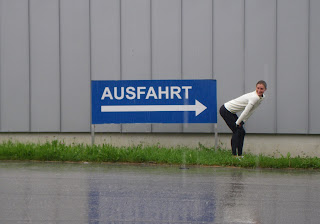 And in other news, I am still bursting with excitement from Adam's good news earlier this week: he was accepted to transfer to Uvic Law School! So, no more Freddy Beach (this does make me a little sad as I did love it there....in the Summer/Fall anyway...), BUT, this means we will both be based in Victoria...for good. Now the search starts for a new apartment (maybe dog-friendly?), but more on that later.....  YAY.
Posted by Lauren at 10:48 AM

I met your boyfriend at run workout this morning, I told him to tell you we are cheering for you and good luck! You were the motivation for us girls today, we heard you busted the mile repeats at Elk Lake 5:15-5:20, BEST of luck on the next race!!

Ausfahrt = exit. That is ALWAYS an exit. (That was really naughty, sorry.) Keep up the good work and racing and I hope you find that dog-friendly apartment.