How I got my appetite back

I realize I may have jumped the gun by saying I was feeling better in my last post. Things got a wee bit worse before they got better.... hence the lack of blogging this past week. This is definitely the least amount of time I have spent on my computer in a long time and I wish I could say it was because I was on holiday in some wireless-free tropical destination, or that I was simply too smashed from training to write, but sadly neither are true.
Here's how it went down after Friday of last week:
I took that day off from training and thought I was feeling better. But, it was likely the freedom to do nothing but rest that took my mind off things, and by that evening the fatigue was back. I put in call in to our wonderful doctor, Steve Keeler to get a medical opinion. It turned out that the intense sinus pain I had the week earlier was actually a sinus infection (sinusitis) and although the pain had subsided, the infection was still there (hence the fatigue, constant headache, pressure behind the cheeks....all the symptoms I wished would just go away....) and the infection needed to be treated asap before it became chronic. So, I was off to the pharmacy to pick up my 10-day dose of antibiotics. Training resumed over the weekend but I still wasn't feeling quite right. My stomach had been acting up the week before and it was starting to get worse. Then there was some nausea, so extreme at times that I was unable to eat (yes, normally I am known as somewhat of a drama queen, but I am NOT exaggerating here. Things were BAD). By Monday the sinus stuff had started to clear up but the nausea and tummy issues were getting worse! I put another call in to Dr. Steve and he prescribed Gravol to help get me through the night and hopefully be able to eat a little dinner. I was instructed to take two tablets before bedtime but warned I might wake up a little drowsy. No big deal. When the alarm went off the next morning I thought it had to be a joke. But, no, it was light outside and I heard the coffee brewing. Oh dear. I laid there for a good 30 minutes before Adam had to almost drag me out. I had to pry open my eyes and hold them open. This was worse than any jetlag I have ever experienced. Again, NOT joking. I actually didn't feel safe to drive to the pool, but that was ridiculous, right?! Dr. Keeler happened to be at the pool that morning and I think he almost started laughing when he looked at me. To make this long story short, I took DOUBLE the adult dosage of Gravol. The pills I picked up were extra-strength. Oh dear!!! Somehow I made it through the swim and the mid-day 3-hour "nap" got me through the rest of the day.
Now here is the good news: I am actually feeling better.....honestly... I woke up feeling like myself this morning. No tummy troubles, no nausea, no sinus issues. I LOVED training today, every minute of it (apart from the bee stinging me in the face while on the bike...). I didn't feel stellar, but I felt healthy and that's all I can ask for now. With all the crap I've been dealing with, I have still gotten through some pretty hefty training with 33km swim weeks and plenty of intensity on the bike and run. Oddly, I still feel that things are going well, but being able to stomach food and go at least one day without a 3 hour nap will be quite a treat!
Adam was quick to pick-up on the true sign that I was feeling better: the cookbooks were out tonight! YES, my energy was back and there would be NO more take-out! Dinner wasn't anything extravagant but I gobbled it up....and then some. The appetite is BACK too! 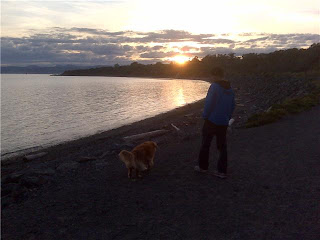 Walking the beach with our favourite duck-tolling retriever, Tinker.
Posted by Lauren at 8:09 PM