Yesterday I had "one of those days." It was one of those days that I was especially thankful I had a coach because I don't think I would have been able to "pull the plug" myself.

It started like any other day. I was a little sleepy when I woke up, but nothing unusual. We headed off to the pool and hopped in for warm-up. I was feeling a little sluggish but no alarm bells. We got started on the main set and oh my gosh, the wheels did not just fall off, they exploded...immediately! Ok, I am being slightly dramatic, but it wasn't pretty. I came in after the first interval (getting slightly less rest than I had hoped...) and regrouped for the next one. Sometimes I warm-up and can get it going as the workout progresses. Somehow it got worse and what I felt was more than simple day-to-day fatigue. I was thankful coach Phil was on hand to intervene. We had a short but reassuring discussion about taking a little "rest." A clear sign that I need rest is when I don't argue and accept the fact that I need to take it easy. I actually felt a slight twinge of relief when I heard those words yesterday... I guess it was necessary. This camp started incredibly well for me. I had some really solid rides and runs last week and some consistent, strong swims. It was nice to see these numbers (watts, splits and paces) for reassurance that I am in fact rolling along well (sometimes fatigue can play with the mind). Anyway, by the weekend I started to struggle with recovery and never seemed to bounce back. I think Phil observed me a for few days before he decided it was time to make a small change to my program.

I finished the swim yesterday, but on my own pace. The rest of the day was cruisey, with a couple hour ride and 30 minute run.
We decided to take a two-day rest so today was lower intensity again with a 90 minute hilly run and a 5km strength swim. My energy levels were back up this morning but that didn't mean I was good to push it again. I try my best to take care of the details and get the most out of my training, so I figured if I am going to rest, then I need to do that right too and stick to the plan. 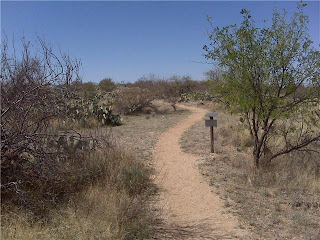 Here's a pic from our run this morning on Cactus Forest Trail, at Saguaro National Park. As for wildlife sightings, things were slow, with only one rabbit (but it did have the biggest ears I had ever seen!). Honestly, this creature was straight out of Alice and Wonderland. I saw it run across the road in front of Kyle and I was certain that was the end of him.
I also discovered a slightly disturbing fact: rattlesnake season starts April 1. I don't know if this means they will be celebratory and out in full-force that day, ready with fully-stocked venom to attack me, but regardless, I am definitely not looking forward to this particular "season." I realize this could also be an April Fool's Joke to see how many people run in long pants that day, with anti-venom-filled gel flasks. Oh wow, the fact that I even thought of that is crazy...
Posted by Lauren at 7:01 PM

Even easy, those sound like some solid training days! Take care of yourself, even if that means another day on the couch, trying to get the remote to work and catching up on Antonio while eating some tasty treats. We don't want any exploding Gunzies.

Your critter sightings are much better than mine, by the way. We have millions of boring, small-eared bunnies on campus,however. I've seen roadrunners,though! (ok, enough of the random comment)