The Joys of Travel 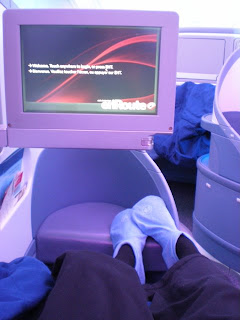 I forgot how far away this race is!

This travel was all to be squished in between noon on Tuesday and noon on Thursday.

Kerry, Kyle and I arrived in Tokyo yesterday afternoon after an 11 hour flight. I don’t know if I am getting used to this travel or if being upgraded to the “pod” makes a huge difference, but the flight wasn’t overly unpleasant (I’m thinking it was the pod :) I have trouble sleeping during the daytime flights so after the 30 minute cat-nap during take-off, I started the movie marathon: Four Holidays, Marley & Me (I was crying my eyes out!), and The Curious Case of Benjamin Button. Despite the decent food and lie-flat bed, I still have to admit that I wasn’t feeling too fresh by the time we landed. I would have done anything to be able to curl up in a ball and snooze right there, but, we still had to collect the bags/bikes, transfer airports and go for a jog before I could put on the pj’s. I’ve done a few “airport runs” over the years and as amusing as they always are, this one might take the cake. Apart from the strip of sidewalk out front for bus pick-up, there really was nowhere else for foot-traffic (I realize this is probably normal as most people DRIVE to an airport and have no need to walk (let alone run) to/from the terminal). We started to run, in the darkness, along a narrow road that had what we thought was a bike lane. However, when buses started to race towards us, INSIDE this lane, and we had to jump to safety onto the guardrail, we decided this probably wasn’t a bright idea. We even had a police officer chase after us, blowing his whistle like mad. Kyle just kept trotting along like nothing out of the ordinary was happening, probably thinking he could definitely outrun this guy. Kerry and I stop, laughing, and realize for our own safety, it’s probably best to head back. We got in just enough to loosen up the legs and finished the run inside the terminal for some dinner. Beyond tired at this point, we opted for the take-away restaurant, which was very busy (a good sign, right?!). I had been raving about Japanese food since the start of this trip and was SO excited to finally indulge. There wasn’t much selection so we just grabbed some bento boxes of salmon, rice, and various other mystery items. Kerry takes one bite of her rice and says, “ it tastes kinda fishy.” I take a closer look the flecks of green/black and realize there are about a million little fish mixed in the rice. We could even see their eyeballs and “insides”. Gross. Kyle then announces, “I can’t do this!” I have NEVER heard those words from him, especially when it comes to food. I guess his meat patty, cold gravy/noodles and mystery gelatin creations were not so delicious. Ok, so the last scraps of airport take-away were not the best, but I promise Japanese food is usually pretty good!

We’re on our final two flights….almost there! More from Ishigaki soon. 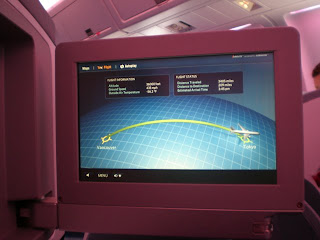 Seeing this made me very happy. 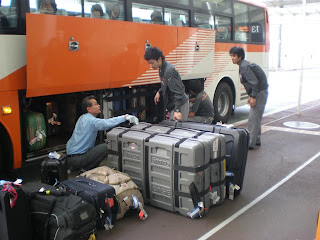 No shortage of help. And yes, they were able to fit everything under that bus! 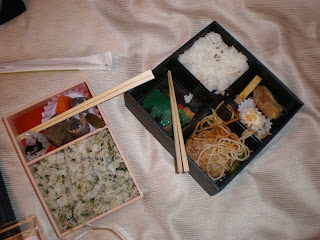 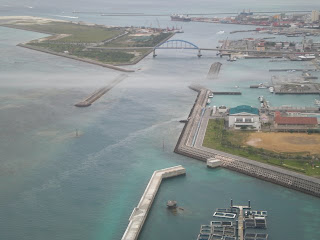 I basically needed IV rehydration after Marley & Me (which I watched with my two dogs firmly planted beside me on the couch). Make sure you replace those fluids!