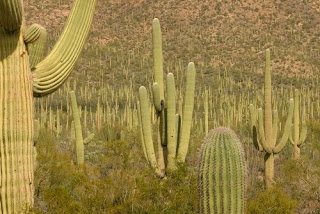 This is completely non-triathlon related, but interesting....to me, anyway, and probably other nature-lovers :)
I have been in awe with the size of cacti in this area. I had pictured the desert landscape to be rather barren, but for the most part, Tucson's desert lands are covered in "forests" of Saguaro cacti (pronounced "sah-wah-roo").
I decided to do a little research on these massive plants and am amazed with what I have learned.
These forests are actually old-growth, with the largest cacti being up to 200 years old. They grow incredibly slowly, about one inch every year, but up to great heights of 20 to 40 feet. They grow side "arms" to increase the plants' reproductive capacity, but again, this is a slow process (75 years per arm!). The rate at which they grow is dependent on the precipitation, which is why they are so large and abundant in Tucson (apparently they get double the rain here than western Arizona, but I have yet to see even a drop!). 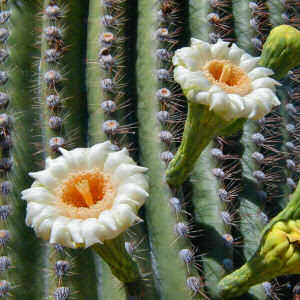 The saguaro flowers are the state flowers of Arizona and they are "night-bloomers," opening in the wee hours from May to July. Their aroma is incredibly pungent, similar to an overripe melon. Here is a disturbing fact: they are pollinated by BATS, hence the blooming during the nighttime (I classify bats in the same category as snakes. In other words, NOT my favourite creatures). So, as much as I love fragrant and beautiful flowers, I am thankful they are not in bloom right now for this very reason. I do not need another animal to be fearful of in the desert. 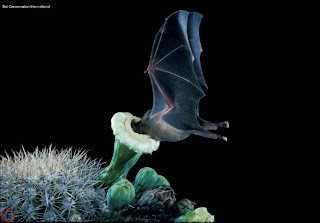 EEEEK!!!!!
These cacti tend to be rather resilient to frost, but in severe temperature drops, the "arms" can be damaged, causing them to droop. I've seen a few of these sagging arms while out on the bike, and it can make the cactus look quite pitiful. Occasionally, the arms come back to life and begin to grow upright again.
Not surprisingly, water comprises most of the weight of these giants. A fully hydrated large stem is more than 90% water and weighs 80 pounds per foot!
Saguaros can provide homes to some desert animals (thankfully not snakes). I often see them with numerous holes, similar to that of a birdhouse, and inside live woodpeckers, pigmy owls, and even lizards. 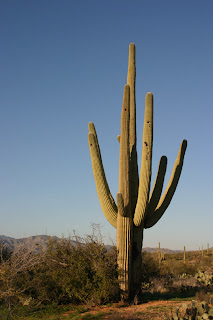 If saguaros don't live to their ripe old age, the most common causes of death are lightening, severe frost, windfall, or humans (e.g. target practice!). When the cacti decompose, the woody ribs that store the water are visible. 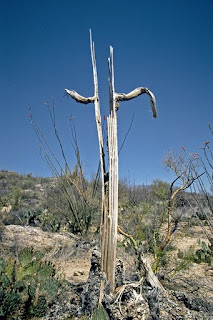 That's enough of a horticultural lesson for now!
Posted by Lauren at 3:26 PM

Fascinating Plant, I had no idea they lived to be centuries old. Very cool.

On the subject of bats, wear your eye protection on twilight rides. I got hit in the eye by a bat after taking off my sunglasses, it wasn't pretty. I am probably the only person in history though to have this happen!

no you're not! it happened to my husband when he was riding in the twilight- and we live in berlin, germany! it hit him right in the face and dropped dead on the ground... yuck!

Drive to the end of broadway... then run fo'evah!

You forgot your references!! haha

Sarah, did he do the rabies treatments? I did :-( hurt my pocketbook (5K) more than quads, arms, and backside. Greg

@Gregwh: puh, so many hard words, had to look them up first ;) he had the vaccination already...5k? wow, it's not so expensive in germany! so, better watch out!