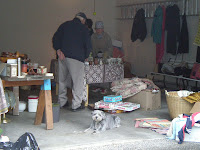 Today was the day I had been dreading for the past 5 years....
As mentioned in the previous post, my parents have been wonderfuly supportive. One example is the no-rent storage facility I have made out of their basement. I think I have moved every year since 1999 and every year, the "transition zone" is always the basement. There is lots of movement of stuff, but the trend seems to have been that more comes down that basement door than ever makes an exit. They have been so patient with me and my explosion of belongings (too patient), and I knew that there was no better time than now to get it cleared out.
This was also a great opportunity for my mom to clear out her closet and cupboards. Our family hasn't done a purge like this is in......probably ever! My parents sold this rather rustic log cabin a few years back so there were about a million nick-nacks and 1700 bird houses that had to go.
I was nervous no one would show as it is a typical Vancouver Fall day (dumping rain). I couldn't have been more wrong. The sale was scheduled to start at 8am, but that didn't stop some early birds from showing up very early. In other words, the night before!! The real sale started though at 6:45 this morning when I was lying in bed and heard a van rumbling outside the house. Yep, it was an eager shopper and he actually bought SO much stuff, including about 18 birdhouses. That really set the tone for the rest of the morning and at times there were at least 15 people in the garage at once. It's weird to watch others sorting through your stuff, but I didn't care, I just wanted it gone! And, of course I had to make this into somewhat of a bakesale, serving up coffee and muffins. I had intentions to try a new cookie recipe but I don't think it would have gone down well with my family if I postponed set-up last night to do some baking.
I spent the afternoon cleaning up and dropping off the remaining goods at the Salvation Army. I can't tell you how good it feels to finally be rid of all that junk. I am never going to buy another knick-knack again (I can almost hear Adam's laughter from 4,000 kilometres away...). Well, maybe one or two!
Now I am going to get on the trainer and try to 'flush' out this day.
Posted by Lauren at 4:13 PM