The raccoon saga continued yesterday. Actually, I suppose you could say it never ended as we have been spotting the mama, Roberta multiple times each day since Monday's "eviction." Sometimes we would see her just cruising through our backyard, or simply hanging out on the fence checking out what's happening around our house. She has even been spotted and heard poking about on our roof. Seeing a raccoon tail dangle in front of our kitchen window is no longer startling. "Oh, Roberta is back again..." My dad, however, is quick to react when he hears her up there and is always prepared for a battle, armed with tennis balls, the hose, and his ladder; he would do anything to prevent her from returning to our house. Two nights ago he heard her pulling apart the roof... at 3 in the morning. Adam and I slept blissfully through the battle that soon ensured. She wasn't backing down and seemed frantic to get inside our attic.

A call went in to Dan, our coon catcher yesterday. He found it very odd that she would return so many times and asked if we had heard any other babies in the house. No, not even so much as a peep. Last night though, Adam and I were returning for walking the dog and heard a faint cry. It sounded distant and muffled, but we knew we had heard that sound before. Once inside the house, the cry was more distinct, and coming from the attic. Oh my gosh, there was a baby stuck up there - 3 days AFTER the eviction. We knew we had to move fast as it was getting dark and we needed to get this little one back to its mom as soon as possible. Armed with a bucket and gloves, Adam and my dad hit the attic. They found the little guy hidden amongst some soft insulation. He was terrified and squealed louder than anything I had ever heard. Adam picked him up by the scruff of the neck and dropped him in the pail. This wasn't exactly the time for a photo opp, but we snuck one before taking him outside. 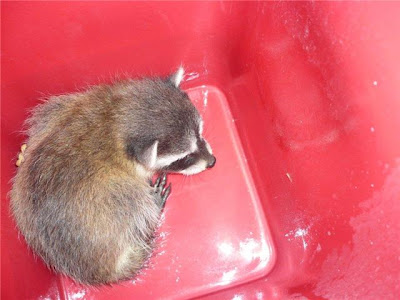 We placed him (now named, Bobbi) at the back of our yard, near where we had seen Roberta strolling through. Adam had to pick him up a couple of times for him to squeal as we needed mom to hear this. It broke my heart to put this little guy through more trauma, but we had to get him back to his mom. We all sat back on the porch to watch. I don't even know how long it took, but we quietly waited, listening for any kind of movement. Eventually we did see Roberta, hustling through the yard, but she seemed confused as to where the noise was coming from. She circled the perimeter and as she did, we heard a similar cry a few houses over - TOMTOM! He was calling to his brother and Bobbi responded. Mom eventually did find the bucket but before she tipped it over to see her baby, she spoke to it with soft purring noises. It responded with a strong chirp. They spoke like this a few times before mom knocked over the pail and promply picked Bobbi up in her mouth. Without hesitation, she was off, in the direction of TomTom's cries.

I was heartbroken after this ordeal as I now understood Roberta's angst and determination to return to our attic. Her maternal instincts were powerful. She's a good mom and we are so happy the family is together again. Even animal rescuer, Adam has a soft spot for that family (we've now got a photo of little TomTom on our fridge :) We look forward to this summer as the kits grow up and we can watch the trio strolling through the neighbourhood.

I knew there was another baby when you tweeted about mom always coming back! I hope he is the last one! They are so cute

Lauren I have read your blog off and on for awhile but, as a crazy animal lover this story truly broke my heart.
I can't imagine poor mama's pain when she realized her baby was trapped without her. What a wonderful rescue but i must admit my initial reaction was ANGER at the animal trapper, Dan for not being more thorough. I hope the baby can survive after 3 days of no food, or love!

Lauren I have read your blog off and on for awhile but, as a crazy animal lover this story truly broke my heart.
I can't imagine poor mama's pain when she realized her baby was trapped without her. What a wonderful rescue but i must admit my initial reaction was ANGER at the animal trapper, Dan for not being more thorough. I hope the baby can survive after 3 days of no food, or love!

It was a tricky situation because the mom had grabbed one of the babies and hid it in the attic, quite far from where the den was. There was no reason to believe that another baby was in the house as it was completely silent, but from what I understand raccoon moms will often tell the kits to keep quiet when in danger. The little one was very obedient, and it took him days to make a peep. I think this little guy will be ok. He looked strong and full of life yesterday, and is now safe with mom again.

that was a nice story. i grew up on a farm in ONT and my mom had a large one acre garden. every summer she would figth the racoons who would stop at nothing to eat her sweet corn. electric fence, useless. in the end what worked was the ringing of a large cowbell for about one hr from 1 am onwards. they can be quite ruthless...but roberta probably just had the best intentions