For some reason animals are drawn to my parents house. Over the years we've had our abundance of family pets (dogs, birds, hampsters, guinea pigs, ant farms, hermit crabs, fish, turtles, and anything "cute" found in the neighbourhood), and wild critters have always seemed to jump on this ship, taking up residence here too.

We don't know why they choose our house because it's not exactly a tranquil environment with our yappy dogs, but it's no secret that the Groves always have visiting creatures. Just the other day our neighbour came over to say, "do you have rats again? We found a dead one in our yard." So, yes it has come to the point where the sighting of any rodent in the neighbourhood is associated with an infestation in our house.

A few weeks back my dad heard some all too familiar scurrying in the ceiling. Crap, the rats are back. He calls the exterminator and after many failed attempts at catching even one rat, it's determined that this isn't the issue. The scurrying continues and is now accompanied with squealing. These footsteps sound heavier than usual, so the next call goes out to Wildlife Control.

It was quickly determined that we have a new type of resident, raccoons! What we didn't realize at the time was that over the next few weeks we'd be seeing an awful lot of Dan, our 'coon catcher,' as he scoured our attic and the soffits (eves) for our furry friend. He was fairly certain we were dealing with a mom and her babies ('kits') as not only was it that time of the year, but she was relentless at breaking back into the house if locked out. It's amazing what those creatures can bust through, chew through, and how they outsmart all of us. It didn't matter if there was a wire screen over the hole or a 1-inch wood board, she would get in. This was driving my dad CRAZY, so as I love to do, I did my best to find humour in the situation. I named the mom, Roberta and the babies were TomTom, Bobbi, and Bob Jr (my dad's name is Robert Thomas). You can bet that he was thrilled to hear the clan was now his namesake! The names stuck and before long, even Adam was asking if anyone had heard from Roberta lately.

The den was eventually located in the ceiling above our living room. Roberta had chosen the quietest and warmest spot in the house - I knew she was a smart one! Dan returned today, armed with his ladder, headlamp, hockey stick, net, mirror, buckets, and even scratches from his previous capture. He was able to access the raccoon den through the soffits, sparing the ceiling drywall inside the house. Roberta took off right away, leaving the kits alone. Dan was able to reach in and grab one squealing baby. It turned out that this was a one-kit litter, somewhat uncommon, but none of us were complaining. The next step was getting Mama our of the house so Dan climbed onto the roof holding a squealing TomTom by the scruff on the neck. Mom did eventually come to claim her baby, picked him up and and they were off. Once the hole was officially sealed up, we watched her attempt to return, baby in mouth. I found this part really sad to watch, but again, was thankful she only had to worry about one baby and would surely find a new den for the two of them.

Of course this created quite the scene on our street today: Animal Control parked outside, squealing animals, nets, traps, gasps, and finally cheers. Just another day at the Groves house. 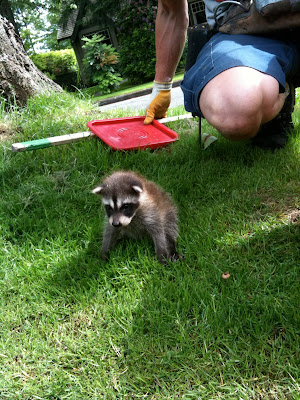 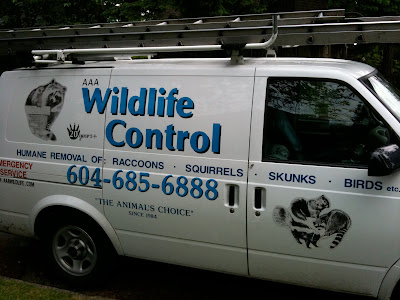 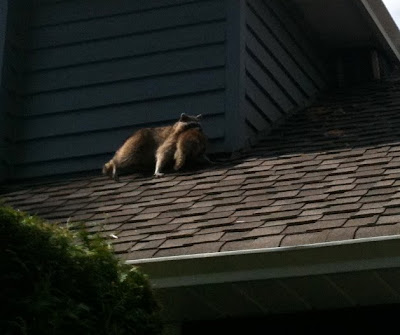