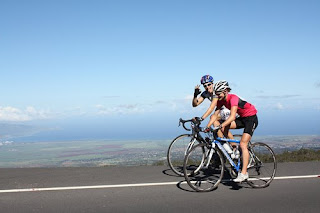 We did it.
Sea level to 10,000 feet. 60km of solid climbing. Huge range in temperatures (I don't know the exact numbers, but it was COLD up there).  3 hours and 39 minutes to the summit for me and Big Blue (that's not another Sarah nickname, it's my bike :-)
We have talked about doing this climb pretty much the entire camp, and I think we considered doing it last week. But, Joel didn't think there was enough fatigue in the legs to make it extra epic, so we waited until the bitter end.
It was hard, I cannot lie. My legs never felt good, the winds were strong, and the altitude was a special treat. However, we were treated to incredible views the entire climb and it was well-marked with altitude signs every 1,000 ft, and mile markers the entire way. The countdown was fun for awhile, but when the air got thinner and we realized just what we had gotten ourselves in to, the enthusiasm dwindled and we simply focused on the road directly ahead (trying not to look UP the mountain at the switchbacks!). Usually I feel a sense of accomplishment to finish such a great session, but once I got to the top, all I wanted to do was put on a parka and lie down. We still had to descend though....60km... I didn't eat enough before the descent and had a few bonking-related scares on some of the switchbacks, but made it home unscathed and immediately devoured many random, delicious items from the pantry.
After a nap, some couch time, and a grocery store shop, we headed out for a run this evening. Tomorrow is our last day on Maui (sniff!) so I am very happy we are starting the day with an open water swim. I WILL see another turtle, and this time will be armed with Jordan's waterproof camera.
Here are some photos from the day: 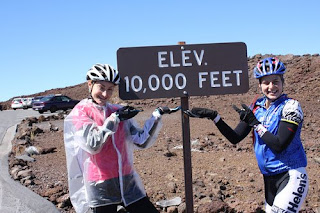 Yes, I look ridiculous, but would you expect any different at this point? 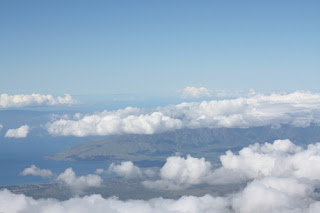 Our ride started somewhere down there. 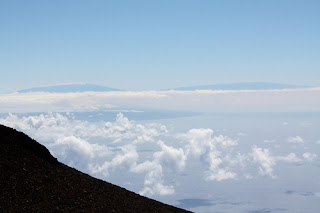 View of Mauna Kea, on the Big Island 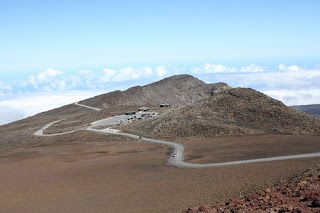 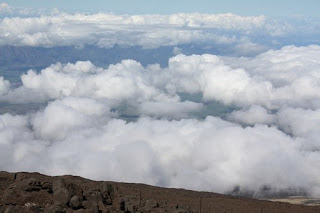 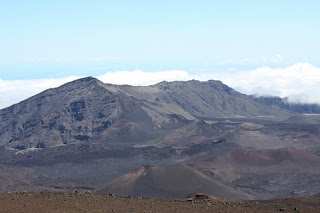