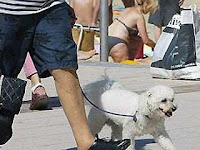 Former French President Jacques Chirac was rushed to a hospital after being mauled by his pet dog who is being treated for depression, in a dramatic incident that rattled the ex-president's wife.

"If you only knew! I had a dramatic day yesterday," she told VSD magazine. "Sumo bit my husband!"

Mrs. Chirac, 74, did not reveal where the former president was bitten, but said, "the dog went for him for no apparent reason."

"We were aware the animal was unpredictable and is being treated with pills for depression. My husband was bitten quite badly but he is certain to make a full recovery in weeks."

Chirac was taken to a hospital in Paris where he was treated as an outpatient and later sent home.