By now, I am sure most have heard the news about Coach Joel. For those who haven't, here is a link to the Triathlon Great Britain announcement, and below is the post from Joel's blog.

This news came to all of us as shock. As much as I don't want to lose a great coach, I do understand Joel's decision to take this incredible opportunity (which is very much well-deserved) and I truly wish him all the best with this next chapter. I hadn't exactly planned on switching coaches again, this time after only two-months, but that is the reality of sport and I feel lucky to have had the opportunity to work under Joel, even for the short period of time. Joel's training philosophy makes sense to me and it is something I will use throughout my career. So, for that, and all the good times along the way, thank you so, SO much, Joel.

I know we will all miss Joel's presence (or his "hollogram" :-) which is why this is especially difficult; we feel as though we are also saying goodbye to a great friend. Of course, one of my first questions to him was, "what about Napoleon?" Thankfully, Poly will be able to join him on this adventure, after a few months of 'observation'.

As for me, I am not really sure what will happen at this point. I am confident we are left in good hands with the appointment of a new High Performance Director, Kurt Innes. Triathlon Canada has our best interests in mind and we will all move on from here. 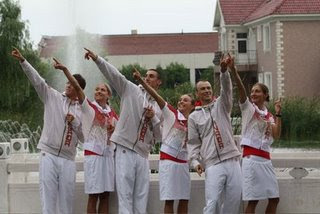 Thanks Canada, its been a great trip.

I'm moving on from Triathlon Canada effective February 9th. It wasn't an easy decision to take as I have enjoyed great support in Canada, but its the right time for me to make a change and take on an exciting new leadership role.

The three years I've been in the role of Senior High Performance Coach at the National Triathlon Centre in Victoria, and the years before that in development roles have been an invaluable experience. I am enormously proud of the continued success of the NTC as a centre for international excellence, and particularly proud of the achievement of our Olympic goal with the silver medal for Canada in Beijing, both as Olympic Team Coach and working with Simon Whitfield as his personal coach since 2005.

It's been an honor and a privilege to have worked with everyone at Triathlon Canada, from Tom Patrick, Alan Trivet, Stephen Holmes, and Larry McMahon, to all of the coaching community, from Barrie, Craig, Patrick, Gary, Phil, and Benoit, and many many more athletes, coaches, volunteers and staff. I have appreciated their support, and trust to make the tough decisions and take a risk to demand excellence in attitude and practice.

Most of all, thanks to all the athletes I was fortunate enough to work with along the way, from our "BAMF" squad in Victoria with Simon, Kyle, Jordan, Lauren, Andrew, Colin, Dano, Paul, Kirsten, and Brent, to the other National and Development athletes representing Canada around the world. I will remember all the fun times, and know you all will keep going with the 'trial of miles, and miles of trials'. Remember, if in doubt, keep it 'organic', and go with "Steadystrongsolidgiveitagoseehowyoufeelstartfastandbuild" :-)

Canada is in great hands with the newly appointed High Performance Director Kurt Innes and is situated in its best position ever coming out of Beijing and into London 2012. I wish the best for the Canadian team and hope to continue to see them all at the races in the future.

So Long, and Thanks For All The Fish