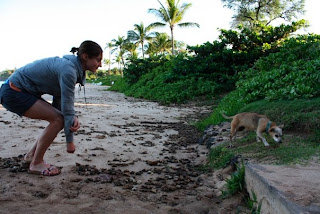 Two major sightings today: a chihuahua and a couple of humpback whales. I realize that chihuahuas are not native to Hawaii nor are their sightings as rare as migrating whales, but they are equally special in my opinion.
We started the day with an ocean swim on the other side of the island. Unfortunately the beaches near us get some pretty massive waves, not the safest for swimming, but world-renowned for windsurfing. The water where we swam wasn't quite as calm as expected but it was still exciting to finally experience the beach (we were joking last night that it has been almost a week and we still hadn't made it to the beach! Most people come to Hawaii just for the beaches.) Some pretty good-sized waves rolled in while we were out there which made for some good chop. But, we had Baywatch Joel paddling alongside us on the surfboard and I know he would have tackled a shark if need be. There was only one minor mishap when Jeff was sucked into one of the reefs. Ouch. The water was pretty murky so I couldn't spot the dolphins and turtles I had hoped and I had one minor (ok, major) panic attack when I got separated from the group and could see no one with the swells, not even shark-tackler, Joel. All I could think about was Jaws....
Thankfully, the whales were spotted once safe on the beach. 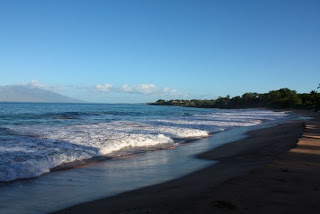 This afternoon was a build run in the cane fields. It was hot and hard and I am feeling sore. Whaaaaaa! (that is my complaining for the day)
Chef Jordan cooked up another delicious dinner: beef burgers (from Maui-raised, grass-fed cows), served over salad with fresh guacamole and some sort of yummy sweet potato hash on the side. Kyle had the "sweats" again while eating which we are learning is a clear indication of a delectable meal.
Posted by Lauren at 9:22 PM

good week for you

Chihuahuas travel from Mexico to Hawaii each year in an epic migration which ends with mating and accompanying their resulting pups back to Mexico. They mostly swim, or some will catch a stiff wind just off the coast of Maui or the Big Isle. :-) Train don't strain.

Hawaii looks amazing. I was just wondering where you guys are staying (what town) and how you found accomadations. Great blog!

We're staying in Paia and coach Joel found us the house we're renting. I'm pretty sure he did an online search for housing and found a few great options in this area. It is a perfect base for training and a neat not-so-touristy town.